Sudanese protesters who took to the streets of Khartoum on Saturday to rally against military rule and mark the third anniversary of the sit-in killing of scores of protesters in 2019, were repelled by security forces who fired tear gas and live ammunition at the crowd.

The protesters had blocked a major road junction in the capital and laid out food to break their Ramadan fast but just before the ifthar where they were to break their fast, officers began breaking up the rally and chased demonstrators into side streets, a local journalist said.

Later postings on social media said people also gathered in the cities of Madani, Kosti and El Obeid, carrying posters with faces of some of the young men killed in the 2019 protests.

Protests and unrest have continued to rock Sudan since months of nationwide demonstrations led to the overthrow of former dictator, Omar al-Bashir, in April 2019.

The Saturday rally was to mark the June 3, 2019 pro-democracy demonstrations where armed security forces charged at the demonstrators who were holding a sit-in outside the military headquarters in the centre of the capital, demanding the army hand over rule to civilians after Bashir’s ousting. 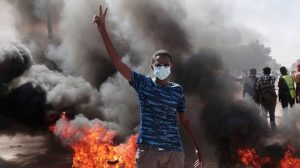 At the end of the confrontation, more than 130 people were reportedly killed, while government officials have continued to maintain that only 87 people were killed in the raid.

The country’s military leaders have also denied responsibility for the 2019 killings but since the October, 2021 coup which ousted Bashir, many of his former allies have been allowed to rejoin the civil service while others have been freed from jail, something Sudanese activists say is an “insult to the memories of the 2019 martyrs.”