The Governor of Texas, Greg Abbott has confirmed that fifteen people have died in a shooting at a primary school in the United States.

The killer, an 18-year-old gunman killed 14 students and one teacher at Robb Elementary School in the city of Uvalde.

The gunman opened fire at the School – which teaches children aged seven to 10 before he was tamed by law enforcement, officials said.

The attacker is identified as a teenager, Salvador Ramos, who the governor said “shot and killed, horrifically, incomprehensibly, 14 students and killed a teacher”.

“He himself is deceased, and it is believed that responding officers killed him,” he added.

“It is believed that two responding officers were struck by rounds, but have no serious injuries.” Abbott revealed. 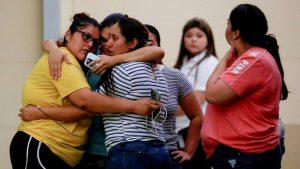 Relatives of some of the victims of the Uvalde school shooting in Texas.

A BBC report says firearms deaths have become even more of a fixture in American life, with the 1.5 million that took place between 1968 and 2017 higher than the number of soldiers killed in every US conflict since the American War for Independence in 1775.

In 2020 alone, more than 45,000 Americans died at the end of a barrel of a gun, whether by homicide or suicide, more than any other year on record. The figure represents a 25% increase from five years prior, and a 43% increase from 2010.

Local hospitals disclosed that students from the school were being treated by emergency services. Two “individuals” were dead when they arrived at hospital, the Facebook post said earlier. They are now planning to hold an “emergency blood drive” on Wednesday.

US President Joe Biden has been briefed on the attack, White House officials said, and is expected to deliver remarks. Mr Biden also ordered that flags on the White House and other US federal buildings be flown at half-mast in honour of the victims in Uvalde.

Libyan protesters have vowed to step up its campaign and continue with their demonstrations until all the ruling elites quit power and pave way for elections.

The protests which began on Friday, saw the burning of the country’s parliament building in Tobruk when a large crowd broke through the security and set the building on fire.

The incident prompted the government to release thousands of security personnel into the streets but the demonstrators were not deterred as they defied the presence of the forces on Saturday and Sunday by holding rallies in Tripoli, Tobruk, and Benghazi, and other major cities in the North African country.

While addressing the protesters, leaders of the movement said they would step up its campaign from Sunday, urging demonstrators to set up tents in city squares and practise civil disobedience until they achieve their goal of ousting political institutions and holding new elections.

Libyan Observer reports that the protesters held their biggest rally in Tripoli for years, chanting slogans against the feuding political elites, as demonstrators blocked off roads in Benghazi and Misrata and set fire to government buildings in Sebha and Qarabuli.

The media also reported that despite pleas by United Nations Secretary General Antonio Guterres, the demonstrators are bent on going on with their daily protests until they force the ruling elites out.

The US has praised Kenya’s President, Uhuru Kenyatta for his effort at resolving tensions between East African neighbour, DR Congo and Rwanda.

US Secretary of State Antony Blinken spoke with President Kenyatta in a phone call on Thursday describes Kenya’s move as the best approach to end armed conflict in the troubled east of the country.

The US State Department Spokesman Ned Price said of the phone call, that “Secretary Blinken expressed his appreciation for the Nairobi process, which has brought together the leadership of the DR Congo, Rwanda, Uganda, Burundi, South Sudan and Tanzania.

“The Secretary noted these heads of state meetings are instrumental for facilitating the de-escalation of regional tensions, and in particular between the DR Congo and Rwanda.”

Kenyan President, Uhuru Kenyatta, last week called on the East African regional bloc to deploy East African force to the troubled eastern Democratic Republic of Congo to restore security following renewed fighting between government forces and the M23 rebels which has seen thousands killed and displaced since the resumption of hostilities.

Although the move to deploy the forces has been commended by the US, United Nations and the African Union, Congolese politicians and the public have expressed reservations about the proposed deployment of peace troops. They said the East Africa Standby Force (EASF) would be duplicating roles of the UN Mission (Monusco) as well as other existing interventions currently on the ground.