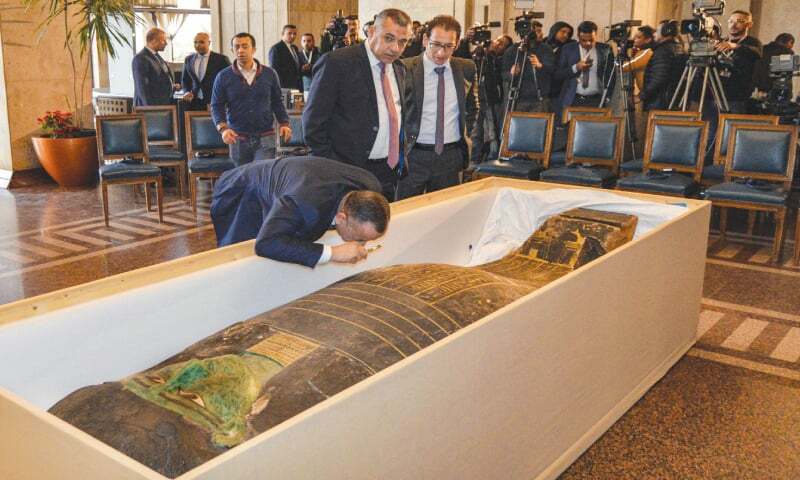 After months of intense negotiations, a 2,700-year-old ‘Green Coffin’ sarcophagus dating back to the late Dynastic Period of ancient Egypt, has eventually returned home after it was smuggled to the United States through Germany in 2008.

Officials of the Egyptian Supreme Council of Antiquities who received the artefact on Monday, said it dates back from an era that spanned the last of the Pharaonic rulers from 664 B.C. until Alexander the Great’s campaign in 332 B.C.

The ‘Green Coffin’ which was featured at the Houston Museum of Natural Sciences was symbolically handed over at a ceremony in Cairo by the U.S. chargé d’affaires in Egypt, according to Mostafa Waziri, the head of the Council.

All the details of the reterival of the green sarcophagus were announced during a joint press conference at the headquarters of the Foreign Ministry in Cairo, which was held by Foreign Minister Sameh Shoukry, Minister of Tourism and Antiquities Ahmed Eissa, in the presence of the Chargé d’Affaires of the US Embassy in Cairo.

The handover, according to Waziri, came more than three months after the Manhattan District Attorney’s Office determined the sarcophagus was looted from Abu Sir Necropolis, north of Cairo.

The stunning sarcophagus coffin which is almost 3 meters (9.5 feet) tall with a brightly painted top surface, is suspected to have belonged to an ancient priest and was trafficked by a well-organized network that has looted countless antiquities from the region, Waziri said.

“We are pleased that this object will be returned to Egypt, where it rightfully belongs.”

In the last decade, Egypt has been able to recover over 29,000 artefacts that were stolen and sold outside of the country and with the return of the priceless objects, the Antiquities Council head believes it would enable the North African country boost its tourism sector which has yet to recover from the impact of the Covid crisis.