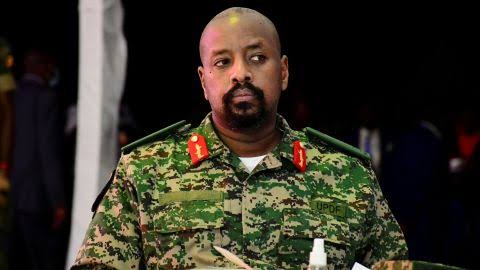 Gen. Muhoozi Kainerugaba, the son of Ugandan President Yoweri Museveni, is on a war path with his father over the country’s ruling party’s style of leadership which he says is not in favour of Ugandans.

Muhoozi who has carved a niche for himself in controversies, on Saturday, launched a scathing offensive at his father and the ruling National Resistance Movement (NRM), saying they “no longer represents Ugandans.”

“I am listening to the outcry of our people for change. I am with the people. Whatever NRM has become certainly does not represent the people of Uganda,” he posted on his Twitter handle on Saturday.

Muhoozi who has often boasted about being the “best bet” to take over from his father as the Uganda’s president in the future, said he is disappointed that his father and the ruling party had derailed as a result of the deteriorating performance of the ruling NRM.

“We shall jointly (all of together) create the 6th republic. The 1st was Obote, the 2nd was Amin, the 3rd was Obote II, the 4th was Okello and the 5th was NRM. We will be the 6th republic! The greatest epoch in history,” he wrote in another post.

This is not the first time Muhoozi has criticised his father over his leadership style. On more than three different occasions, he has called on his father to change his style and come up with policies that will be to the benefit of the masses and his utterances have made him quite popular with the ordinary people who see him as being part of them.

Last month, he had revealed plans of calling for a big youth summit where he will inform the young people in the country of a big plan that he has for them.

He had also previously expressed interest in replacing his father as the President of Uganda to honour his mother, Janet Museveni, who is Uganda’s Education and Sports Minister, whom he calls “an angel.”