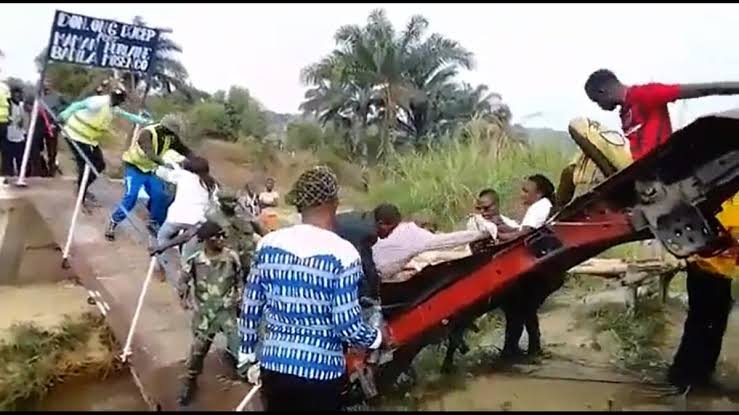 A newly but poorly constructed small footbridge in the Democratic Republic of Congo (DRC) caused panic and chaos when it collapsed during its official opening ceremony.

The incident which happened on Tuesday in an unspecified location in the the DRC was captured in a video and became a hilarious sensation when it hits the social media and quickly went viral.

According to the story behind the video, the footbridge was constructed by a local politician across a stream and during its official commissioning, the bridge could not take the weight of the few dignitaries who had climbed it for the opening and promptly collapsed.

The politician and other were saved by the timely intervention of onlookers who had gone to witness the opening of the bridge.

The person who posted the video on social media had written as a way of explanation:

“According to authorities, the footbridge was meant to help people cross a river during the rainy season, as the old makeshift bridge would often become submerged during flooding.

“During the ceremony, a group of people mounted the bridge, which was less than two metres wide. A red ribbon was fastened across the rails at the end of the bridge and an official was set to cut it with scissors.

“A group of people had gathered below to watch the ceremony and celebrate the official opening. Unfortunately, the footbridge succumbed to pressure when the ribbon was cut and it collapsed and broke into two. That was when all hell broke loose.”