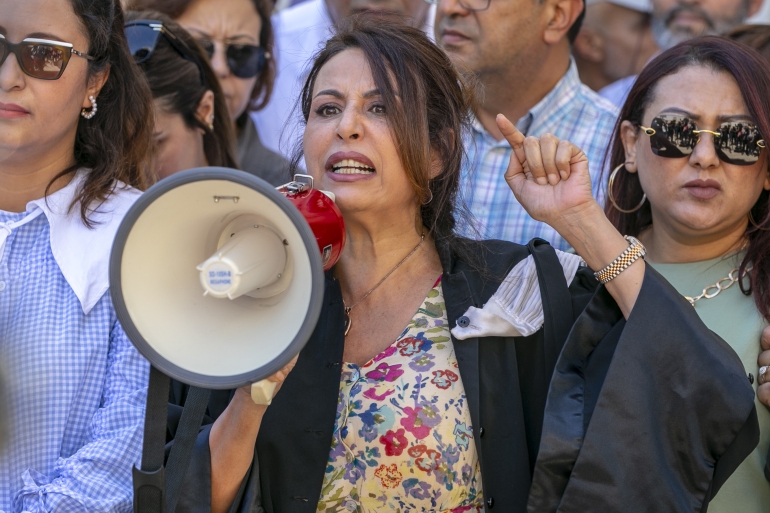 Judges in Tunisia have once again extended their nationwide strike to the third week in protest against the sacking of 57 of them by President Kais Saied who accused the affected judges of protecting Islamists and terrorists.

In a press conference on Saturday, the judges said they would not be deterred by the arrests and attack on their members by security forces loyal to the president.

President Saied had, in one fell swoop, dismissed 57 judges on June 1, accusing them of corruption and protecting terrorists, an accusation the Tunisian Judges’ Association said were politically motivated.

But President Saied has insisted that his moves are needed to cleanse the judiciary of rampant corruption and that he does not aim to control the judiciary.

On June 4, the judges suspended their work in courts and said the president’s decisions were designed to control the judiciary and its use against his political opponents.

“The judges have decided unanimously to extend the strike for a third week … to hold a day of rage in which the judges will protest in the streets in their uniforms,” Mourad Massoudi, the head of the Young Judges Association, told journalists at the conference.

Massoudi said members of judges union had decided to stage a hunger strike against the decision to dismiss them, with another judge, Hamadi Rahmani, confirming the decisions.

Before sacking the judges, President Saied had dismissed the parliament, suspended the 2014 constitution to rule by decree, as well as dissolving the electoral commission in moves the opposition see as a coup meant to consolidate a one-man rule after assuming executive powers last summer.

Tunisian opposition party, Ennahda has revealed that its leader, Rached Ghannouchi has been summoned by a judge over money laundering allegations.

The party revealed news of his summon on Wednesday and accused the authorities of targeting him for political reasons.

The summon is said to answer questions about the allegations, which Ennahda say are untrue and a result of “distortion and fabrication”.

Recall that a court in Tunisia in May, slammed a travel ban on Ghannouchi, alongside 33 other party faithful under the suspicion of involvement in an alleged parallel security service put into place after the 2011 Tunisian revolution.

Ghannouchi has been one of the loudest critics of president Kais Saied since the president seized broad powers last year, moved to rule by decree and ousted the elected parliament in which the Ennahda leader is speaker.

Ghannouchi’s summon is not the first time the Judiciary since Saied came to power will take decision that is perceive by many to be targeted at the president’s rival.

In June, a Tunisian military court sentenced a prominent political opponent and rival of President Kais Saied, Seifeddine Makhlouf, to one year in prison and also banned him from practising law for five years.

Burkinabe authorities has revealed that former president of Burkina Faso, Blaise Compaore will return from exile for the first time since being ousted in a 2014 uprising.

The junta led by Colonel Damiba made the revelation on Wednesday. Compaore will return home despite his conviction earlier this year for complicity in his predecessor’s murder.

Blaise Compaore was sentenced to life imprisonment by a military tribunal in April for the murder of his predecessor and ‘best friend’, Thomas Sankara, in a 1987 coup.

The statement from the presidency said the meeting of former heads of state “does not hinder judicial prosecutions engaged against some of them”, but did not elaborate.

An association of lawyers representing the families of Sankara and others killed during the 1987 coup demanded that Compaore be arrested once in Burkina Faso.

Local media have speculated in recent days that Compaore could be granted a pardon over the Sankara murder as part of the junta’s reconciliation process.

The military Junta of Lieutenant-Colonel Damiba ceased power afterward and Christian Kabore has been on house arrest since then. Although fighting insurgency was one of the reasons for the last coup, Burkina Faso however remains in the eye of the storm with continuous terrorist attacks.