In the long and glorious history of the English Football Association Cup, simply known as The FA Cup, there have been a number of African soccer stars who have played in final and lifted the prestigious trophy.

There also have been some who graced the final but came out empty handed. Players like South Africa’s Quinton Fortune, Togo’s Emmanuel Adebayor and Moroccan Hakim Ziyech readily comes to mind. 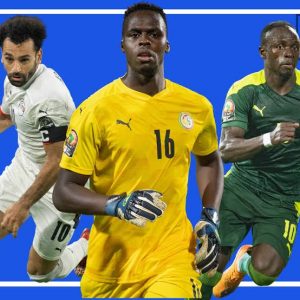 As the FA Cup final takes center stage today with Liverpool squaring up against Chelsea, a number of African players will be involved and at the end of 90 minutes, some will fall into the category of African stars who either won or lost the cup.

Either the quartet of Mohamed Salah, Sadio Mane, Naby Keita and Joel Matip all of Liverpool or the duo of Edouard Mendy and Hakim Ziyech of Chelsea will be set for the joy of lifting the trophy or face the disappointment of losing.

Here is a roll call of African players who have reached the FA Cup final but never won it.

Former Togo National Team Captain, Emmanuel Adebayor turned out for Arsenal, Manchester City and Tottenham Hotspur, while plying his trade in England but never managed to win the FA Cup with any of these elite clubs. His best sniff at the cup was in the 2015-16 season while playing for Crystal Palace when they faced and lost 2-1 to Manchester United in extra time, with the Eagles giving up a one goal lead with only 12 minutes left on the clock.

The former South African international midfielder was on the books of Manchester United for seven years, between 1999-2006.

Though he won a Premier League title in 2003, he could not place his hands on the FA Cup as he was on the losing side in 2005 when the Red Devils lost to Arsenal 5-4 on penalties after a barren draw in regular time. The Ivory Coast international also in the same team with Adebayo in the 2015-16 final which lost to Manchester United.

Zaha who was a key player for Alan Pardew’s men at Crystal Palace started and completed the match but despite his dominant performance and constantly threatening the Man United back four, he could not propel his team to a win. The Ivory Coast centre-back was an unused substitute when Manchester United lost the 2017-18 final to Chelsea with a wonder strike from Eden Hazard.

Bailly was a key member of the team which steam rolled its way into the final but this term, has been a bit part player and is likely to leave the club due to injuries that has limited his appearances. Will retired Moroccan winger Ziyech be lucky this time after he failed to lift the trophy last year when Chelsea lost 1-0 to Leicester City?

This will be a second straight final for Ziyech who started last season’s final and played 68 minutes but was not lucky to get on the scoresheet as Youri Tielemans’ 63rd minute goal proved the difference.