The NDLEA said “the financial instruments suspected to be counterfeits were discovered on Wednesday at NAHCO export shed of the Lagos airport during cargo examination of some consignments meant for exportation to the UK on a cargo flight.”

NDLEA’s Director, Media, and Advocacy, Femi Babafemi, made the disclosure in a statement on Sunday, May 1, 2022, in Abuja.

Babafemi in the statement said that at least one suspect identified as Oguma Richard Uchenna has been arrested in connection to the attempt to export the cheques, which were neatly concealed inside 4 bound hardcover books disguised as academic project literature, to the United Kingdom. 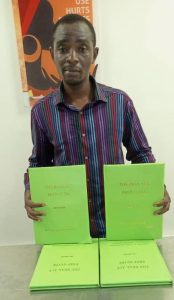 The statement further revealed that operatives of the NDLEA stopped an attempt by drug traffickers to smuggle into Nigeria 10.89 kilograms of cocaine through a Qatar Airways flight at the Murtala Muhammed International airport.

The agency also said it had made arrests in Kaduna state, Ondo state, Akwa Ibom state, and other parts of the West African country.

The agency under the leadership of its current Chairman/Chief Executive, Brigadier-General Buba Marwa, has rejuvenated its operations across the country and increased its tempo in its fight against drug trafficking and consumption and other related crimes with an increased number of seizures and arrests, especially the high profile ones.