The troubles of veteran US actor Will Smith, is not about to end anytime soon as he has been slammed with a 10 year ban by the Academy of Motion Picture Arts & Sciences, organisers of the Oscars, following his altercation with comedian Chris Rock, leading to the now famous ‘Oscar Slap.’

As a result of the ban, Smith will not attend any event organised by the Academy for the next 10 years either physically or virtually, as a result of his slapping Rock on stage during this year’s Oscars ceremony after the comedian’s nasty joke about the actor’s wife, Jada Pinkett, over loss of hair due to a health condition known as alopecia. 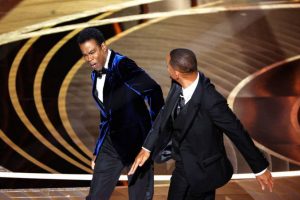 Will Smith smacking Chris Rock at the Oscars

A statement by the Academy on Friday announcing the ban on Smith said:

“The Board has decided, for a period of 10 years from April 8, 2022, Mr. Smith shall not be permitted to attend any Academy events or programs, in person or virtually, including but not limited to the Academy Awards,” the statement signed by Academy President David Rubin and CEO Dawn Hudson, said.

The decision to ban Smith, according the Academy, was made during a Board of Governors meeting held on Friday in Los Angeles, after an initial scheduled meeting for April 18 was expedited after Smith announced his resignation from the Academy last week.

After receiving the ban notice, Smith issued a quick and short statement which reads;

“I accept and respect the Academy’s decision,” the actor said.

What went down at the Oscars?

During the Academy Awards on March 27, Rock who was on stage to present an award, had made a joke about Jada Smith’s close-cropped hair, which Smith found offensive and stormed the stage in a fit of anger to smacked the comedian.

After a lot of public outcry, Smith publicly apologized to Rock the day after the incident via social media.

Smith also reached out the next morning to the show’s producer, Will Packer, apologized and expressed his embarrassment over his behaviour.

The Academy of Motion Picture Arts and Sciences banned Will Smith from attending all Academy events, including the Oscars, for the next 10 years, multiple news outlets reported Friday, following his slap of comedian Chris Rock at the Oscars ceremony. pic.twitter.com/VbSDgdoG2q

To further express his regret, Smith had tendered his resignation from the Academy but entertainment aficionados had predicted that further actions would be taken against him.

As industrial actions continue to across the United Kingdom, cleaners have joined other transport workers to strike over pay in Britain, the Rail, Maritime, and Transport union.

The union made the position known on Saturday, stressing that its members, working as cleaners throughout the transport network, had voted to hold their first national strike action.

Over 1,000 contracted-out cleaners working for the likes of Churchill, Italian Servest, and Mitie are said to be eligible to strike.

The union is demanding that the cleaners be paid 15 pounds ($18.14) an hour, with sick pay, holiday entitlement, and better pensions.

Industrial actions have been on the rise in Britain lately with railway workers, nurses, doctors, and teachers, as well as emergency services, postal services, and telecoms workers have either on strike or planning action.

Britain in an attempt to manage the influx of Africans into Europe has introduced plans to reduce the rate of immigration to the United Kingdom by limiting the number of foreign students entering the country.

According to the Office for National Statistics (ONS) show that approximately 560,000 people migrated to the UK as of June. This marked a sharp increase from the comparable period last year, driven by the influx of Ukrainian refugees.

Under the new arrangement, there will be limitation on the number of family members that international students are allowed to bring into the country.

The policy move would be a reversal of the 2019 International Education strategy which sought to boost the country’s education exports to £35 billion per year.

Africa, particularly Nigeria has a large number of students in the United Kingdom. Nigerians consistitute a third non-EU country with the most students in the UK with 21,305 students currently enrolled in UK institutions, ahead of the United States with 19,220 students.

China and India with 143,820 and 84,555 students respectively have the highest number of students in the UK.