The death toll in what has been described as the ‘deadliest’ and most devastating floods in South Africa, has risen to 306 as at Thursday morning.

The KwaZulu-Natal in South Africa’s Durban province has been the epicenter of torrential rainfalls resulting in the floods and mudslides which began on Tuesday, with residential buildings collapsing, hillsides being washed away, roads cut off and more people being declared missing. 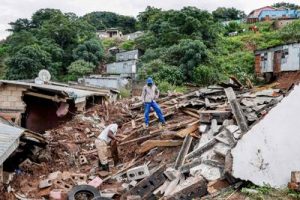 The South African meteorological agency in a report, said the downpour which was the “heaviest rains in 60 years” pummelled Durban’s municipality known as eThekwini, for two days consecutively.

“At the moment the confirmed figures of people that have perished during this disaster is 306, across the KwaZulu-Natal province,” Nonala Ndlovu, spokeswoman for the provincial disaster management department, said in another statement.

President Cyril Ramaphosa who visited the affected areas on Wednesday, described the floods as a “catastrophe” and a “calamity” for the country.

“Bridges have collapsed. Roads have collapsed. People have died … this is a catastrophe of enormous proportions,” Ramaphosa said, assuring the people that his government will surely come to their aid.

“It is here, and our disaster management capability needs to be at a higher level,” said the president. 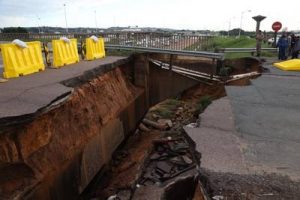 The search for missing persons is still going on, Mr Ramaphosa said, as he promising to “spare nothing” in dealing with the disaster.