The Al-Qaeda linked Al-Shabaab militants have claimed responsibility for a blast on Friday night at a seaside restaurant in Somalia’s capital, Mogadishu, where six people were killed and several others wounded.

The Islamist terrorist group which has been on a renewed bombing offensive in Somalia, including a mortar attack on the parliament on Monday, said in a statement by its military operations spokesperson, Abdiasis Abu Musab, that they were targeting “security officers and politicians of the apostate government.”

However, Abdikadir Abdirahman, the director of Aamin Ambulance Service which coordinated rescue operations after the attack, those killed and injured were civilians.

“So far, we carried six dead civilians and seven others injured,” Abdirahman said. 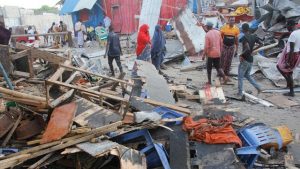 The affected restaurant, the Pescatore Seafood Restaurant which opened recently in Lido Beach in the south of Mogadishu, is often frequented by security and government officials but it was not clear at the time of the attack if there were any top officials at the restaurant.

Al Shabaab frequently carries out bombings in Mogadishu and other cities in the war-torn country as part of its war against the Somalian country’s central government.

The group has been fighting for years to topple the central government and establish its own rule based on its strict interpretation of Islam’s sharia law.