Faced with abuse, torture and discrimination, scores of African refugees and migrants currently trapped in Tunisia, have demanded the authorities to evacuate them to other countries.

The refugees who are mostly survivors of illegal immigration attempts to European countries by sea, have been staging a “sit-in” in front of the office of the United Nations High Commissioner for Refugees (UNHCR) in Tunis, the Tunisian capital since Saturday, and have also petitioned the United Nations to compel the Tunisian government to evacuate them.

The migrants and refugees, particularly from sub-Saharan Africa, have regularly complained of being subjected to verbal and physical abuse in Tunisia by security and government officials.

The migrants, many of whom are women and children, have been spending the night on cardboard boxes spread out on the grounds of the agency amid suitcases containing their personal belongings.

Denouncing the inaction of the UN in their plights, the refugees displayed banners with inscriptions such as “We need to be evacuated,” hung at the entrance to the building. 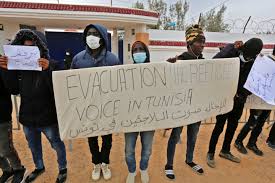 A spokesman for the migrants, Saleh Saeed, a Sudanese from Darfur, told reporters that the UN has refused to act accordingly, accusing the commission of abandoning them.

“The real problem is, the UN commission has abandoned its main role, which is our protection. Instead of doing that, it has left us on the street. We were living in Zarzis, and the UN commission demanded our evacuation from there, cut off all funds and stopped protecting us.”

A refugee from Chad, Mohamed Nour, who also spoke to journalists, claimed there have been instances of racism against them which makes life difficult.

“We have been attacked in our homes. We just want to be evacuated from this country.”

In a recent ambush on Sunday , 42 soldiers were killed in the northern region of Gao. A statement by the army claimed jihadi extremists used drones, artillery and booby-trapped vehicles.

Armed groups affiliated with al-Qa’ida, have for some time attacked military bases in the West African country. They claimed responsibility for attacks on Mali’s main military base in an attack last month.

Meanwhile, Mali on Thursday announced the delivery of aircrafts L-39 and Sukhoi-25 jets as well as Mi-24P helicopter gunships were displayed during a ceremony from Russia.

Mali under the current Junta of Colonel Goita has been on a thread of breaking diplomatic relations with allies. It started by breaking defence alliance with the French, the junta also quit the anti-jihadist force, G-5 force but has enjoyed good relationship with Russia.

Right group, Human Rights Watch (HRW) has accused Cameroonian troops in the Northwest Regions of killing at least 10 people in a crackdown against anglophone separatists.

HRW indicts Cameroon’s military in a string of allegations monitored in the battle between security forces and English-speaking militants seeking cessation in francophone-majority Cameroon.

According to the report, “Cameroonian soldiers summarily killed at least 10 people and carried out a series of other abuses between April 24 and June 12, during counter-insurgency operations in the North-West region.

“The troops also burned 12 homes, destroyed, and looted health facilities, arbitrarily detained at least 26 people, and are presumed to have forcibly disappeared up to 17 others.”

The Anglophones of Cameroon, 20 per cent of the population, feel marginalised. Their frustrations surfaced dramatically at the end of 2016 when a series of sectoral grievances morphed into political demands, leading to strikes and riots.