It’s another weekend and another opportunity for African soccer stars to showcase their talents to the world as they take to the field for their various European clubsides.

In this edition of Africa to the World, we preview some continent star exports who are expected to feature for their respective clubs around Europe this weekend

In the English Premier League, Liverpool could go top of the league albeit for a few hours with their African contingent which include Mohammed Salah, Sadio Mane, Naby Keita and to some extent, Joel Matip, when they take on Newcastle on Saturday.

Hours later, Manchester City with Riyad Mahrez could take over the top spot when they battle Leeds United in the tea-time fixture.

In Turkey, forgotten Nigerian striker, Anthony Nwakaeme of Trabzonspor has been silently painting the league red with goals and this weekend, he will lead his table-topping side against Antalyaspor and a win will secure them the title as they have an 11 points lead over second place Fenerbahce.

In the Serie A, AC Milan duo of Ismael Bennacer and Franck Kessie will seek to hold on to top spot in the league when they host Fiorentina on Sunday afternoon.

Trabzonspor have been without a Super Lig title in over a generation but that wait could come to an end this weekend when they tackle Antalyaspor with Nwakaeme hoping to fire Trabs to the title.

Nwakaeme missed last week’s 3-1 win over Adana Demirspor due to a slight knock but the attacker id in line to return for gameweek 35’s clash with Antalyaspor. 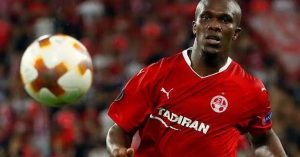 A staggering 11 points separate the table-topping Black Sea Storm from second-place Fenerbahce, and maximum points on Saturday will guarantee Trabzonspor their first league title since 1984.

Watford may be battling a lost caused to remain in the EPL as their diminishing battle for survival takes them to Burnley this weekend where a victory in this relegation six-pointer will see them cut the gap to six points.

Another defeat against the Clarets will more or less seal the side’s fate for relegation, but they will have to end a 10-game losing run at Vicarage Road to boost their prospects of avoiding the drop.

The quartet of Salah, Mane, Matip and Keita could all feature for Liverpool when they travel to in-form Newcastle United in Saturday’s early fixture and a win will take them to the top of the standing as the battle for the title heads to the wire. 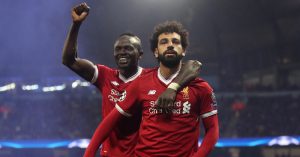 Success for the Reds at St James’ Park will end the Magpies’ six-game winning run on home turf and send them top of the standings before Riyad Mahrez and his Manchester City teammates play Leeds United in the tea-time fixture.

It remains to be seen if the Algerian will feature from the off at Elland Road following his midweek miss against Real Madrid in the UEFA Champions League that had Pep Guardiola almost jumping out of his skin. 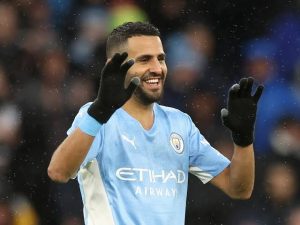 But the wide attacker could play in some capacity as the Citizens aim to hold off their challengers atop the standings.

The importance of the Egyptian Elneny for Arsenal in their push for European football in the last fortnight will once again, be on display as he deputises for injured African compatriot Thomas Partey once again.

Unless something drastic happens, the for midfielder is likely to continue in Mikel Arteta’s 11 for the Gunners’ trip to West Ham United on Sunday, looking to hold on to fourth spot in the league. 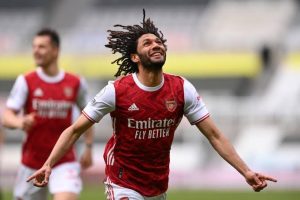 David Moyes’ line-up at Chelsea suggested the Hammers are putting all their eggs in the Europa League basket, so rotation is expected at the London Stadium.

Success for Elneny and his colleagues will see the North Londoners end another week in the Champions League positions.

Aubameyang’s run of two goals in his last seven in all competitions has coincided with Barcelona’s underwhelming run under Xavi with three losses in their last four games threatening to undermine their recent improvement.

If the former Arsenal captain gets a goal this weekend when Barca takes on Mallorca in gameweek 34 , that would be his 10th goal in La Liga since joining in January.

Having won the last eight fixtures between the sides, Xavi will hope his team return to winning ways in front of their fans having lost to Rayo Vallecano last week. 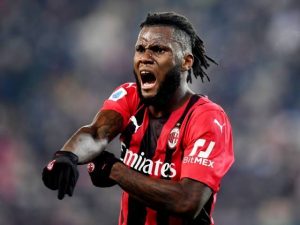 The pair of Bennacer and Kessie could feature for Stefano Pioli’s men when they host Fiorentina at San Siro looking to consolidate their place.

Vincenzo Italiano’s team may have defeated Napoli in early April, but two losses on the trot leave them just outside the European slots, making them underdogs for the trip to Milan.