At least 17 African migrants have died while 10 were reported missing after four boats carrying around 120 people sank off the Tunisian coast of Sfax as they tried to embark on the dangerous mission of crossing the Mediterranean Sea to Italy, a Tunisian security official, Lt. Col. Ali Aayari, said on Sunday. 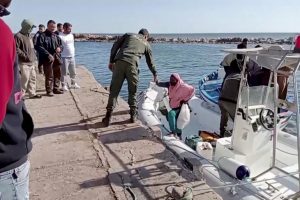 Aayari, who is in the Tunisian Coast Guard, added on that 98 migrants were “rescued off the coast of Sfax by rescue officials when the incident” which happened on Saturday.

“Unfortunately, 17 of the migrants and refugees died when the makeshift boats sank. The boats were four and most of the migrants were women and children. 10 people are still missing while 98 were rescued by officials,” Aayari said.

The coastline of Sfax has been notorious for being a major departure point for people fleeing conflict and poverty in Africa and the Middle East and seeking a better life in Europe, the UN High Commissioner for Refugees (UNHCR), said in reaction to the accident.

In recent months, dozens of people have drowned off the Tunisian coast, with an increase in the frequency of attempted crossings from Tunisia and Libya towards Italy, the UNHCR said.

The Tunisian Interior Ministry said earlier in the week that it had arrested more than 20,000 refugees and migrants off its coast last year while at least 15,000 reached the coast of Italy in 2021.

Earlier this month, 13 African migrants, including six children and four women, were confirmed dead when their boats sank off the Tunisian coast on their way to Europe, a judicial official in the country, Mourad Turki, said.

“Another 10 migrants were declared missing as the two make-shift boats sank off the coast of Sfax, while 37 were rescued. Among the bodies recovered were four women and six children,” Turki added in a statement.

Majority of the migrants were said to be from sub-Saharan Africa and had set off in the two boats to cross the Mediterranean into European countries in search of greener pastures, with many of them fleeing conflicts and poverty in their countries