The crisis in Nigeria’s ruling party has hit new direction as the Independent National Electoral Commission, INEC. has rejected a letter inviting it to an emergency meeting of the National Executive Committee of the All Progressives Congress, APC, the ruling party.

Niger state governor, Abubakar Bello, hinted he was taking over as the Chairman of the Caretaker/Extraordinary Convention Planning Committee party from Governor Mai Mala Buni of Yobe State.

The rejection from the electoral body means setback on the plot to take over the party’s leadership from Governor Mai Mala Buni by governor, Abubakar Bello, 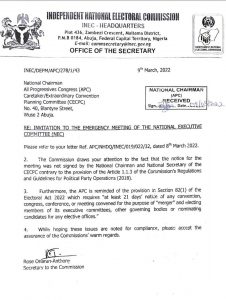 INEC’s response, which dated March 9, 2022, signed by the Secretary to the Commission, Rose Oriaran Anthony, was titled, “Re: Invitation to the emergency meeting of the National Executive Committee”, and addressed to the National Chairman, APC CECPC.

The commission drew the attention of the CECPC to the fact that the letter of invitation was not signed by the National Chairman and National Secretary of the CECPC, Buni and Senator John Akpanudoedehe, respectively.

This, it said, was contrary to the provision of Article 1.1.3 of the Commission’s Regulations and Guidelines for Political Party Operations (2018).

INEC also reminded those who wrote and signed the letter of the provision in Section 82(1) of the Electoral Act 2022, “which requires at least 21 days’ notice of any convention, congress, conference, or meeting convened for the purpose of merger and electing members of its executive committees, other governing bodies or nominating candidates for any elective office.”

The commission, therefore, urged APC to note the key issues raised for compliance.

The letter by INEC is considered a big clog in the wheels of a plot by a bloc in the party to stage a coup against Buni, who duly transferred power to Governors Sani Bello of Niger State, to enable him to attend briefly to health issues, according to a leaked letter on Thursday.