Rwanda has joined a list of African countries like Nigeria and Zimbabwe who have announced plans to tax online services and digital companies consumed within the country.

Some of these service providers are video streaming sites, social media platforms, and companies that offer downloads of digital content. They are expected to pay digital tax to the Federal Inland Revenue Service.

The principle that allows international tax and cross-border activities was designed after the need for industrialization post WW11 in the 1920s and known as permanent establishment (PE) status.

The principle requires that a business only be taxed in a country where it creates sufficient physical presence. Since most companies in the digital economy can operate in a country without setting up appearances, the rule does not capture them. 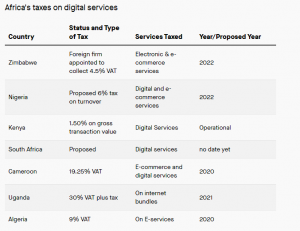 According to the Rwanda Revenue Authority (RRA), a proposal has been presented before the Ministry of Finance and Economic Planning from where it will undergo several procedures before implementation if approved.

“When you pay for services such as Netflix, you are using money that you have generated in Rwanda. So, we are asking, why don’t we collect VAT on these services yet they are being paid for by our citizens? If you pay 12 dollars a month for Netflix, why don’t we keep some of that amount at the source here?” Jean-Louis Kaliningondo, the Deputy Commissioner General of RRA said.

“If you go to Western countries, for example, France, you find that Amazon pays VAT yet it is not a French company. European countries are collecting VAT on services provided by foreign platforms, he added.

In November 2021, Ghana announced plan to introduce 1.75% levy on all electronic transactions including on mobile money payments, bank transfers and merchant payments to widen the tax net.

A number of African countries have expanded the scope of their indirect taxes to cover digital services, but only a few have thus far implemented some form of direct digital services tax that applies to non-residents with no physical presence in their respective countries.

Foremost Kenyan music streaming platform, Mdundo, says it has recorded a whopping 290 percent user growth which has taken it to a 20 million mark since going public in 2020.

Mdundo which was launched in 2023, provides access to the continent’s hottest music to users in 15 countries in Sub-Saharan Africa, with millions monthly downloads and streams via its website and app.

According to Disrupt Africa, the company got listed on the Nasdaq First North Growth Market Denmark in 2020 following an over-subscribed pre-sale period that raised $6.4 million at the time in a bid to solidify its leading position in the pan-African music market.

Since then, it has grown the number of monthly active users by 290 percent from five million to almost 20 million, with revenue growing by approximately 340 percent over the same period.

Mdundo CEO Martin Nielsen, in a statement on Thursday, said the platform is also planning to focus more deeply on the five biggest music markets in Sub-Saharan Africa which include Nigeria, South Africa, Kenya, Tanzania and Ghana.

“Our growth strategy in the last two years has paid off with strong user growth and consistent revenue growth across our core markets. Looking forward towards 2025, we will continue focusing on aggressive growth in users and revenue but with an increased focus on driving value per user and we expect a positive EBITDA by 2025,” Nielsen said.

“Our focus will remain on user and revenue growth and we expect to grow our revenues by approximately 100 per cent from this year to the year ending June 2023,” he added. Nigerian mobility fintech startup, Moove has made significant moves with its capital as it has secured a $20 million four-year structured credit.

The investment was announced at a business reception in Lagos co-hosted by the British high commissioner in Nigeria.

“BII forms an important part of the UK’s package of tools and expertise to help Nigeria build their pipeline for investment and scale up infrastructure investment, in particular to achieve clean, green growth. The launch of BII marks a continuation of this partnership, and we look forward to seeing BII’s support expand and diversify in Nigeria.”  Catriona Laing said.

BII’s Chief Executive Officer, Nick O’Donohoe, while speaking on the rationale behind the move said “in Moove, BII has a partner that aligns with our commitment to back dynamic tech-enabled businesses that can help accelerate impact in Nigeria by strengthening the country’s informal transport industry.”

“I am delighted that not only will BII’s investment help to create jobs and provide entrepreneurial self-starters with the means to own their vehicles, but Moove’s clear focus on gender diversity will foster inclusive economic opportunities for women, both within the company’s workforce and among its drivers.” O’Donohoe concluded.

Moove, according to information on its official website, was founded in response to the challenge faced by over 2 million African mobility entrepreneurs – the lack of access to vehicle financing. It was initially built to solve this problem in Lagos and has since expanded to 6 cities across Africa.

Moove raised $23 million in 2021 to scale rapidly across the continent.

The tech company is raising its revenue-based financing model globally to serve the millions of mobility entrepreneurs in emerging markets around the world who have limited or no access to a vehicle or vehicle financing.