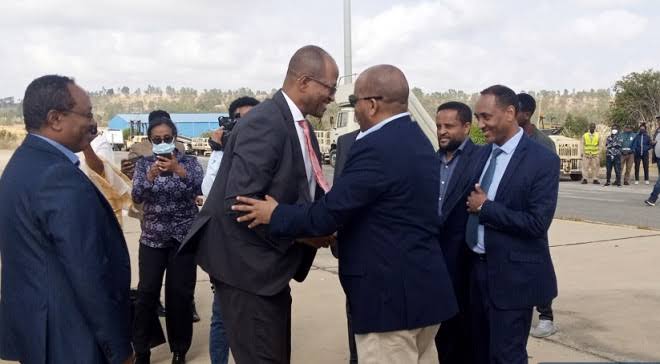 An Ethiopian government delegation on Monday morning, visited Mekele,
the capital of Tigray, for the first time since war broke out between government forces and rebels in the region over two years ago.

The official visit by senior federal officials as announced by the government, was led by the Speaker of the House of Representatives, Tagesse Chafo, who said the visit was necessary so as to oversee the implementation of the main points of a peace agreement signed on November 2 with the Tigrayan rebel authorities.

“This gesture is a proof that the peace agreement is on the right track and progressing,” the government communication service said in a statement on Facebook.

It added that the delegation composed of 20 top government officials including the National Security Advisor, Redwan Hussein, the Ministers of Justice, Gedion Timotheos, Transport and Communications, Dagmawit Moges and Industry Melaku Alebel, as well as the CEOs of Ethiopian Airlines and Ethio Telecom, Mesfin Tassew and Frehiwot Tamiru.

The Ethiopian government and the Tigrayan rebel authorities had signed an agreement in Pretoria after days of negotiations, to end a war that has ravaged for two years, killing tens of thousands, displacing millions and plunging the region into a deep humanitarian crisis.

The agreement which was brokered by former Nigerian President Olusegun Obasanjo, provided for the disarmament of rebel forces, the re-establishment of federal authority in Tigray and the reopening of access to the region.

Since the agreement was reached, there has been a marked improvement as the fighting has stopped, while food and medical aid is gradually arriving the troubled regionn.

The rebels also announced that they have “disengaged” 65% of their fighters from the front lines, while Mekele has been reconnected to the national electricity grid and the main bank announced the resumption of its financial operations in certain towns.