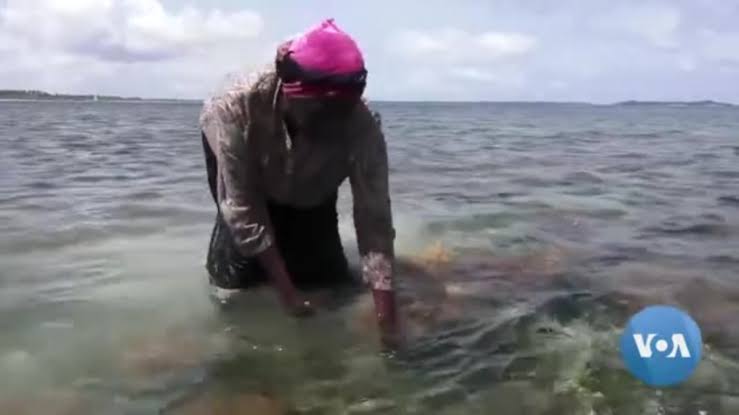 Kenyan women are being empowered by Seaweed farming, providing them with the means to earn a living, according to the Kenya Marine Fisheries Research Institute (KMFRI), a national research institute which promotes the sustainable development of the country’s Blue Economy.

The Seaweed farming project which is supported by KMFRI, is also seen as an alternative to fishing due to a decline in fish stocks and a less risky activity than farming.

One of the seaweed farmers, Fatuma Mohammed, while eulogising the project, said:

“We are unable to engage in meaningful farming on dry land since wild animals such as the colobus monkey, wild pigs and baboons regularly invade our farms. They can destroy crops on a one-acre piece of land within a day.”

“Seaweed farming mostly employs women who previously were not allowed to engage in fishing. Many also see it as being more lucrative than farming.

“Farming on dry land is expensive, as it requires different types of fertilizers that may be water-based and thus need to be sprayed onto plants or applied in soil. The use of chemical fertilizers has led to soil degradation thus leading to reduced yields. Seaweed farming is the better option, as we are able to reap benefits,” she added.

A field officer from the KMFRI who identified himself as Nasoro, said the yields from “farming on dry land are not great, since there are many challenges, such as invasions from wild animals and thieves. The yields were also negatively affected by low amounts of rainfall this year.”

“Most of the raw materials produced by the group are exported to markets in South Africa, the US and China, while extracts from dried seaweed can be used in the cosmetic and pharmaceutical industries as well as soil fertilizer,” he said.