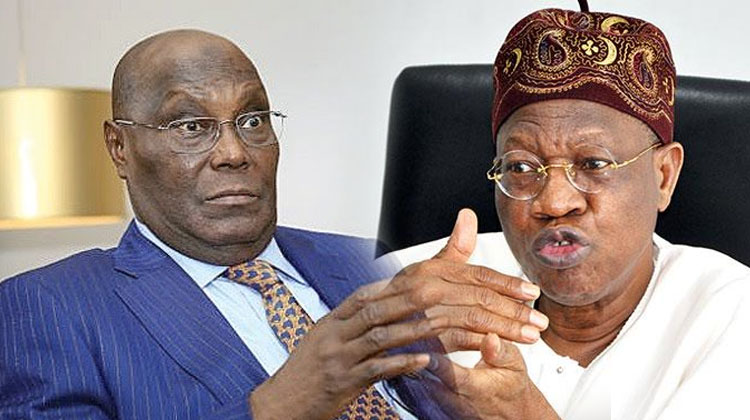 The Federal Government of Nigeria has condemned the promise by one of the major presidential candidates in next year’s elections, Atiku Abubakar, to reopen all Nigerian borders if elected president.

Atiku Abubakar, a veteran contestant for Nigeria’s top job is the presidential candidate of the Peoples Democratic Party, PDP, made the pledge during his campaign rally in Katsina on Tuesday.

Nigeria’s Minister of Information and Culture, Lai Mohammed, at the 15th edition of the President Muhammadu Buhari, PMB, Administration Scorecard Series, argued that Atiku’s pledge was born out of political desperation.

The minister maintained that Atiku’s hunger for power would not make him hesitate to return Nigeria to the era of unbridled inflow of weapons and massive importation of food to the detriment of local farmers.

“By that statement, Alhaji Atiku will shut down most, if not all, of our new fertiliser blending companies, with thousands of jobs going down the drain.

“Also, by his declaration, the former vice president has told Nigerians that he will worsen security in the country by allowing arms and ammunition to flow in unhindered into the country,” he said.

“His Excellency, Atiku Abubakar, may also want to know that while Nigeria was the number one export destination for rice in 2014, our country has now moved to number 79, according to Thai Authorities.

“By throwing open the borders indiscriminately as he has pledged, Alhaji Atiku Abubakar has simply announced that he intends to return Nigeria to the number one importer of Thai rice in 2023!

“For sheer expediency, Alhaji Atiku, a former Customs Officer who rose to the pinnacle of his career, is ready to erase the gains made since 2015 in pushing Nigeria closer to self-sufficiency in the production of staples,” he said.

The Nigerian government in August 2019 ordered the closing of all the country’s land borders and opened some of it in December 2020, a move that President Buhari says was in the interest of local farmers.

Nigeria is due for another general election in 2023 when President Muhammadu Buhari, who has been in office since 2015 will be completing his second term of four years. Will Atiku Abubakar get lucky this time?