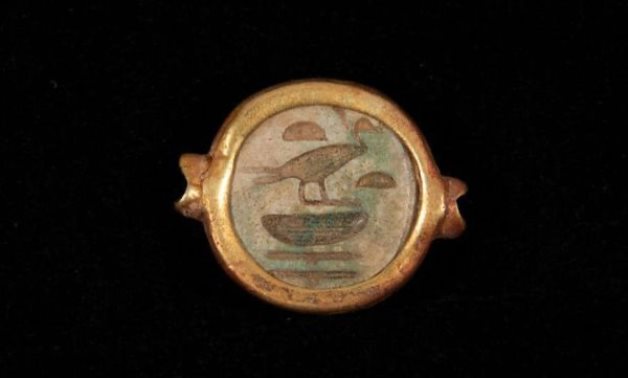 An Egyptian-English archaeological mission affiliated with the University of Cambridge, has discovered some ancient golden ornaments in the Tel el-Amarna Antiquities Area in El-Minya Governorate, the Secretary-General of the Supreme Council of Antiquities, Mostafa Waziri, said in a statement.

Waziri who said the precious objects contained a group of gold ornaments which were uncovered during excavations in the Northern General Cemetery.

He stated that the mission has been working in the Northern General Cemetery since 2010 in an attempt to study the quality of food and common diseases, as well as the social and economic situation of the residents of the city of Akhetaton (Tel el-Amarna), which was the capital of Egypt during the era of King Akhenaten.

Also confirming, the Director General of Antiquities of Central Egypt, Gamal el-Samastawy, said that the gold ornaments consist of a ring decorated with a picture of the ancient Egyptian deity of fun, Bes, another ring decorated with hieroglyphs, and a small necklace of hollow gold beads.

“It is worth noting that Tel El-Amarna is considered one of the most important archaeological areas in Egypt, as it was the country’s capital during the era of King Akhenaten, who called for monotheism and the worship of one god, which he called Aten,” Waziri said.

“Akhenaten named the city Akhetaton which means the horizon of Aten. In the city, he established many religious buildings for the worship of Aten, such as the Great Temple and the Small Temple, in addition to royal palaces such as the Grand Palace and the King’s House, linked by a bridge crossing the royal road used by Akhenaten to pass from his residence to the seat of government.

Akhenaten also built the Northern Palace, known as Nefertiti Palace, as well as many large houses belonging to courtiers and senior statesmen.

“The area also houses 25 tombs carved in the eastern mountain for senior statesmen and priests. These are large tombs engraved with religious themes representing the art of Amarna,” he added.

This is in addition to the royal cemetery, which is similar in its layout to the tombs of the New Kingdom in the Valley of the Kings, and is located inside the mountain, 15 km to the east of the ancient city.