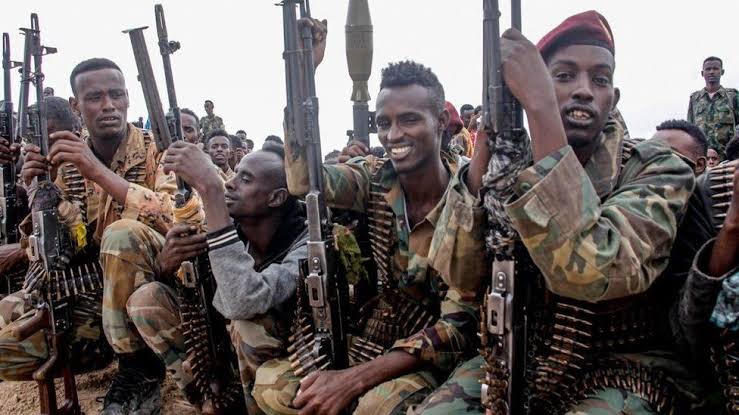 Witnesses say a government-backed Somali militia group which killed over 45 insurgents of Islamist group, al-Shabaab, on Sunday in the country’s central region, beheaded the militants in the same manner the terrorists treated their victims.

The beheading of the terrorists of the Al-Qaeda-linked group followed a fierce battle in the Hiran region of Hirshabelle State, where there has been significant fighting between al-Shabaab and militias allied with the federal government.

Local media reports on Monday that citizens have accepted calls by the government to take up arms against the insurgents with backing from the central government.

An official of the Hiran Elders Council, Ahmed Abdulle, who spoke with Reuters, said:

“Al-Shabaab is not strong, it just burns people, beheads people and put their heads in the streets just to terrorize. Now, we are doing the same: we have ordered the beheading of al-Shabaab fighters,” Abdulle said.

Residents in nearby Galmudug state also took up arms to fight the insurgents who had occupied 10 villages and imposed a strict Sharia Law.

“Al-Shabab put us in hell. … So our people decided to liberate themselves. … My daughter is also fighting in the frontline, she has an AK-47 on her shoulder,” Ahmed Shire, the Galmudug Information Minister, who also spoke with Reuters, said.

“This week, we have recaptured nine villages. It is a big revolution by Galmudug state. Al-Shabaab has increasingly burned houses, destroyed wells, and beheaded civilians in the Hiran region; that, combined with its demands for taxes amidst the worst drought in 40 years, has pushed more residents to take up arms,” Shire added.