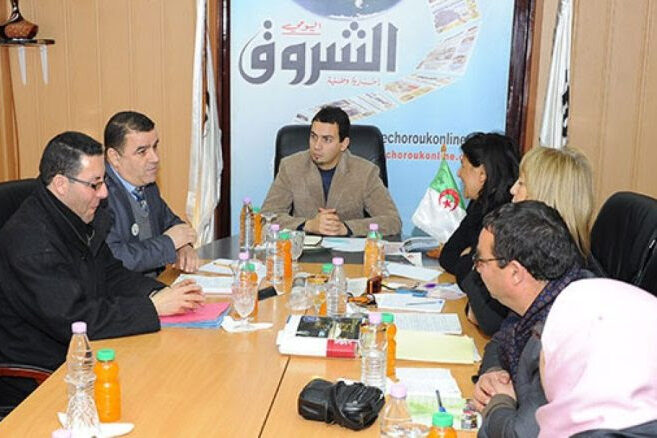 The Algerian authorities have clamped down and banned a newspaper, the Echorouk, for publishing a story that was not favourable to the government.

A senior journalist with the newspaper which maintains anti-goverment stance, Belkacem Haouam, was also arrested in a raid on Saturday and has been placed in pretrial detention due to an article he wrote about stopping the export of Algerian dates containing harmful pesticides, a claim the Ministry of Commerce later denied.

The decision to arrest Haouam reportedly came after the Ministry filed a complaint against the newspaper and the journalist, alleging that the report had caused harm to the national economy.

After the arrest of Haouam, he was charged to the court to appear before the public prosecutor and the investigating judge, who ordered him to be put him on pretrial detention after being formally charged.

Also as a result of the report, Echorouk was prevented from being printed, with remnants of it last publication on Friday confiscated.

In the “offensive” article published on September 7, Haouam had written about a decision taken by the Minister of Trade to immediately stop the export of Algerian Deglet Nour dates after they were withdrawn from several European markets because they contain high levels of chemicals not licensed in Europe.

The article angered the Ministry of Trade and Export Promotion, which issued a statement refuting this information.

“Everything mentioned in this article is based on baseless and unjustified information that harms the national economy and the wealth of our country. The quality of Algerian dates is preferred at all international levels,” the ministry asserted in the statement.

“This unprofessional behaviour is based on the writer’s failure to investigate the facts and the reliable information provided by directorates. The ministry’s efforts largely focus on promoting and encouraging non-oil exports.

“The ministry has decided to take all necessary measures against the writer of the article and the relevant newspaper including judicial prosecution before the competent authorities,” it insisted.