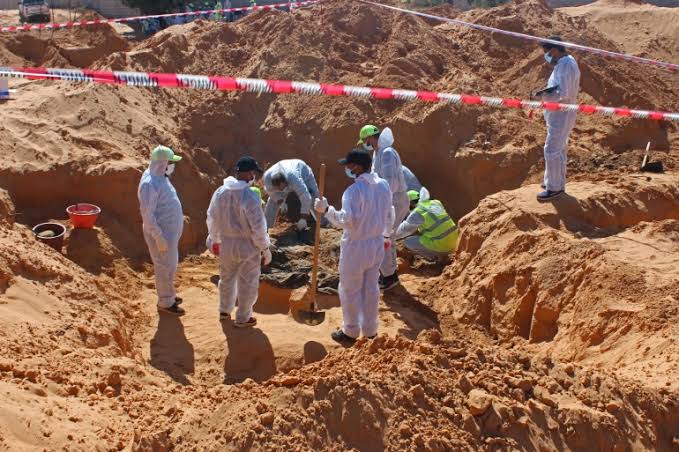 Seven bodies were on Monday discovered in new mass graves in the Tarhuna province in the southeast of Libyan capital, Tripoli.

The General Authority for Search and Identification of Missing Persons in a statement on Tuesday, said the seven unidentified bodies were discovered in a mass grave in a garbage collection site in the city which is about 65 kilometres to Tripoli.

The Authority said the new mass grave was left by the Al-Kani militia loyal to warlord Khalifa Haftar, and that the excavation operations may still discover more bodies.

The Authority also indicated in the statement that forensic medicine will be used on the bodies and samples taken to refer them to the laboratories department to complete the matching process with the reference samples of the families of the missing persons.

Earlier this month, Libya’s Attorney General, Siddiq Al-Sour, had revealed the exhumation of 259 bodies from 82 secret graves in Tarhuna and its suburbs, with 120 bodies unidentified.

He has also announced the filing of 280 law suits related to mass graves in the city of Tarhuna, pointing out that 10 cases were referred to the courts, and charges of murder, torture, kidnapping, forced disappearance, armed robbery and theft were brought against 20 defendants.