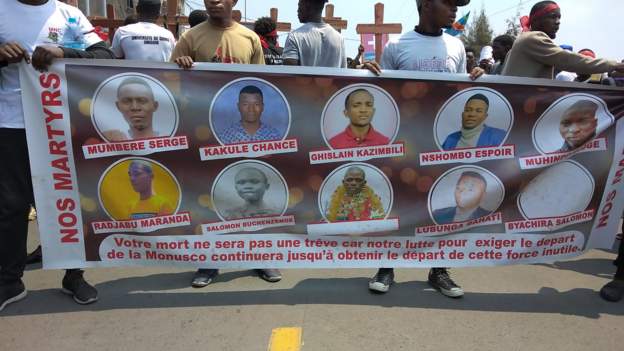 Ten of the people killed in recent anti-UN mission protests in the Democratic Republic of Congo were on Friday, given a mass burial in the eastern city of Goma.

A total of 36 people, including children as young as 11 years, and four peacekeepers, were killed in the one week protests in four towns, according to an official goverment report.

The demonstrators had protested against the continued stay of the UN Peacekeeping Mission (MONUSCO) in the DRC, accusing it of ineffectiveness in the fight against armed rebel groups, and in the process, ransacked and looted facilities at the Mission which led to a bloody confrontation with security forces.

More than 5,000 people who attended the mass burial for the slain protesters were still holding up anti-UN banners demanding that its peacekeeping mission leaves the country.

There have been disagreements over who shot the protesters; while activists say Monusco peacekeepers were to blame, MONUSCO has accused some demonstrators of snatching weapons from Congolese police and opening fire.

Tensions between the DRC authorities and the UN have reached an all-time high with the government calling for the expulsion of the UN mission spokesman, Mathias Gillman, while also expressing a desire to have the mission leave the country before the end of 2024.