Seven people have been reportedly killed while as many as 10,000 have fled the gas-rich Cabo Delgado province of Mozambique as renewed jihadist attacks resume in parts of the country, the United Nations reports.

According to the UN Refugees Agency, the fresh attacks came a few years after suspected jihadists launched a bloody insurgency in 2017 where more than 4,000 prople were killed, sparking a regional military mission last year that temporarily restored a sense of security.

The report noted that between Monday and Tuesday, four people were beheaded in the remote village of Natupile as terrified residents fled the area.

“People from Natupile took photos, so we know it happened,” Antonio Kalimuka of the UN High Commission on Refugees, said.

On Tuesday, suspected jihadists killed three workers at an Australian-owned graphite mine, Triton Minerals, while two security staff were injured, Kalimuka added in a statement.

“The following day, southern African regional military forces staged an attack on the insurgents in a forest in Macomia district north of Pemba, the provincial capital.

“During the joint operation, terrorists were killed and others suffered severe injuries, while the military forces suffered one death and six injuries,” the UN mission said in a statement. 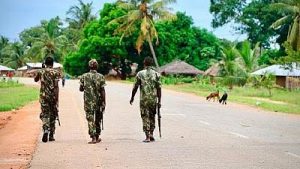 The total number of displaced  people varies from month to month, but in May it was estimated at more than 730,000 by the U.N. refugee agency.

“Displaced people were witness to killings, beheadings, rape, houses being burned, and abductions, and reported the kidnapping of several boys,” British charity, Save the Children, also said in a statement on the situation, adding that more than 80% of those forced to flee their homes are women and children.