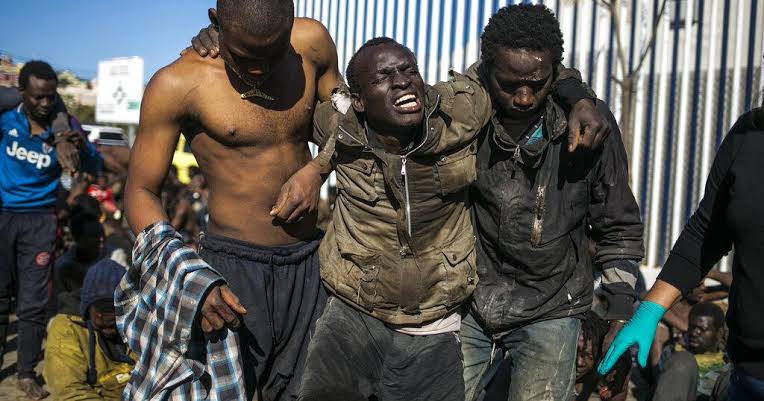 18 Africans migrants seeking to cross into the Spanish North African enclave of Melilla from Morocco on Friday, have been confirmed killed in a stampede that ensued, Moroccan police said on Saturday.

The police report also noted that an unspecified number were injured as the crowd of migrants surged across Morocco’s border fence with the enclave in a bid to cross over to Europe.

A spokesman for the Spanish government’s office in Melilla said about 2,000 people had attempted to make the crossing but many were stopped by Spanish Civil Guard police and Moroccan forces on either side of the border fence.

“A total of 133 migrants breached the border between the Moroccan city of Nador and Melilla on Friday, the first such mass crossing since Spain and Morocco mended diplomatic relations last month,” the police said.

Morocco’s Interior Ministry in a statement, said the casualties occurred when people tried to climb the iron fence separating the enclave from Morocco, adding that “five migrants were killed on the spot and 76 injured, and 140 Moroccan security officers were injured.

“13 of the injured migrants later died in the hospital, raising the death toll to 18,” the Moroccan official news agency MAP, said.

However, the Moroccan Human Rights Association gave a conflicting figure as it reported that 27 people were killed while Spanish officials said 49 Civil Guards sustained minor injuries with four police vehicles damaged by rocks thrown by some migrants.

Friday’s crossings were the first attempt since relations between Spain and Morocco improved in March after a year-long dispute centered on the Western Sahara, a former Spanish colony annexed by Morocco in 1976.