An Egyptian public prosecutor on Monday ordered the arrest of 13 teenage boys who were caught on video harassing two female tourists at the Giza Pyramids near Cairo.

The young suspects who are between 13 and 15 years, will also remain in custody pending an investigation into the incident which reportedly happened over the last weekend.

The arrest of the accused youngsters came after a viral video emerged on social media showing a crowd of boys swarming around the two young women at the archeological site which is one of Egypt’s top tourist attractions bringing thousands of visitors to the country every year. 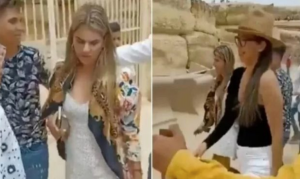 According to a statement from the prosecutor’s office, the arrested boys will be tried before a juvenile court since they are minors.

In the video, the boys were seen jeering and mocking the women with some pressing close to the them as they struggled to get away.

A tour guide who filmed the incident and reported the matter to the police said the teenagers “verbally and physically” harassed the women, though it was not clear if they had sexually groped the women, the office of the chief prosecutor said in a message on Tuesday.

The teenagers have all denied the charges but the video has drawn outrage on social media in the country where sexual harassment as well as sexual misconduct is becoming rampant and authorities are doing everything possible to curtail them.

The problem of sexual harassment in Egypt gained worldwide attention during and after the 2011 uprising that toppled President Hosni Mubarak when women were harassed, groped, and in some cases, beaten and sexually assaulted during mass anti-government protests.