The Office for the Co-ordination of Humanitarian Affairs (OCHA), an arm of the United Nations, has warned of extreme hunger in the Sahel region of Africa in the next three months.

The UN agency added that already, an estimate of about 18 million people are currently facing severe food insecurity across the arid Sahel belt that stretches across Africa immediately south of the Sahara.

A report issued by Martin Griffiths, the head of OCHA on Friday, noted that “millions of refugees and displaced people in Africa’s Sahel region face severe hunger as food rations are being cut by up to half in some areas because of a funding shortfall.” 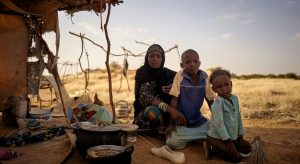 Griffiths said that the hunger crisis in the region is the worst since 2014 and is the result of several factors ranging from the war in Ukraine to climate change and regional conflicts.

18M people in the #Sahel face severe hunger over the next three months.

This @UNCERF allocation will help ramp up the humanitarian operations in these four countries, but it’s no substitute for the more substantial donor contributions we need to maintain our response. https://t.co/a00O4Zn4J4

“A combination of violence, insecurity, deep poverty and record-high food prices is exacerbating malnutrition and driving millions to the fringes of survival.

“The recent spike in food prices driven by the conflict between Russia and Ukraine is threatening to turn a food security crisis into a humanitarian disaster,” he said.

“The situation has reached alarming levels in Burkina Faso, Mauritius, Chad, Mali and Niger, where nearly 1.7 million people will experience emergency levels of food insecurity during the lean season between June and August,” the report said.

Lean season in the #Sahel is approaching. Millions of people are being driven to the fringes of survival.

In Burkina Faso, Chad, Mali and Niger, the situation has reached alarming levels.

There is no time to lose. We must act now to save lives. pic.twitter.com/CdEaQQUdKM