Barely one week after a group of Muslim extremists in the Nigerian Northern state of Sokoto lynched a 200-level female Christian student of the Shehu Shagari College of Education, Deborah Samuel, by beating her to death and setting her corpse on fire within the school premises for allegedly insulting Prophet Muhammad in a WhatsApp voicenote, another group of extremists have declared a death sentence on a Christian lady, Naomi Goni.

The death threat is coming from a group in Borno State, another predominantly Muslim state in Northern Nigeria, following another allegation of blasphemy and insulting comments on the Islamic Prophet on Facebook.

The fundamentalist group, which has vowed to kill Goni if the state government led by Professor Babagana Zulum refuses to take a decisive action, said they will “never sleep” until “immediate action is taken” or they will take the laws into their hands.

In a Facebook post on Monday by the leader of the group, Tanko Izge, the group was emphatic on the government taking action in punishing the alleged culprit as, according to him, the “punishment for blasphemy against Prophet Muhammad was death” and as such, the lady must die. 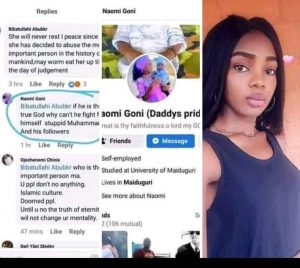 Izge who wrote in the Hausa language said:

His message, when translated to English language reads:

“There is a girl named Naomi Goni who insulted the Messenger of Allah (SAW) and in Islam it is a death sentence even if it is a Muslim.

“We therefore call on the Borno State Government to take immediate action or else we Muslims will not sleep and we will take action.”

However, the lady in the center of the controversy has rebutted the allegations, denying making the said insulting post.

According to her, her social media account had been hacked by unknown persons who may have posted the offensive content which has now put her in trouble.

The Borno State police spokesman, ASP Sani Kamilu, who confirmed the death threats, in a statement, said the force had swiftly taken Goni into protective custody, while promising to do everything possible to protect her.